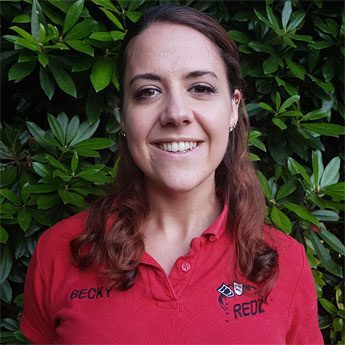 She has achieved IDTA Freestyle exams and is currently studying ISTD Tap, Modern and Jazz as a performer.

Whilst studying for her BA (Hons) Degree in English Language and Linguistics at Roehampton University, Becky took part in several performances with both the Dance and Performing Arts Societies. She was also an extra in a university zombie movie (the video is floating around on YouTube somewhere!) Becky has just finished her first ‘Joining Forces’ show, performing with Woking Dance Space. She is also a member Phoenix and has had the opportunity to perform with Strictly Come Dancing’s Pasha Kovalev five times at Camberley Theatre. She has also performed alongside Phoenix in the Isle of Wight and Germany as well as many fetes around the south of England.

Since September 2017, Becky has been principal of her own Redz Performing Academy site in Ash and enjoys teaching performing arts to a new generation of performers.